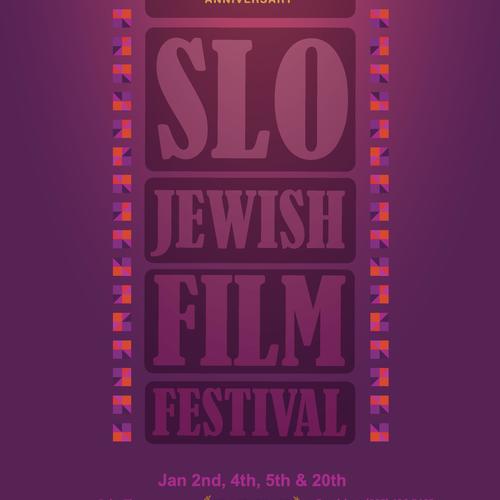 The SLO Jewish Film Festival is a unique cultural experience on California’s Central Coast - celebrating Jewish life, community, and films. Filmmakers from around the country come to San Luis Obispo to engage with our community and feature the stories they are telling through their films. Each screening features a live interview with the filmmaker. Please join us for the entire festival experience or pick a film to attend - you'll love it!

The origin story behind one of Broadway's most beloved musicals, Fiddler on The Roof, and its creative roots in early 1960s New York, when "tradition" was on the wane as gender roles, sexuality, race relations and religion were evolving.

This compelling documentary presents the history of Hollywood as it has never been seen before: Hollywood as the most successful ideology of the 20th century, created by Jewish immigrants from Eastern Europe. It chronicles the amazing success story of the half-dozen individuals who created the movie industry studio system and became the moguls of Hollywood during its Golden Age.  Highlights include archival footage, interviews, and commentary on these leaders, including Adolph Zukor, founder of Paramount; Carl Laemmle, founder of Universal; Jack and Samuel Warner, founders of Warner Bros.; Louis B. Mayer, founder of MGM; William Fox, head of 20th Century-Fox; and Harry Cohn, who ran Columbia Pictures.

Marion Finkels was fourteen when she and her family fled Nazi-occupied Europe and sailed across the Atlantic Ocean, finding safe haven in Cuba. Refugees who made it to Havana, including young Marion, found work to support themselves and their family members in a newly transported trade: diamond polishing. Firsthand survivor accounts take us back to 1940's Havana - an era at once tumultuous, heartbreaking, and intoxicating - to reveal an immigration success story.

A Q&A with Andrea Bakalar, Marion’s niece and film advisor will follow the screening.

Leningrad, 1970. A group of young Jewish dissidents plots to hijack an empty plane and escape the USSR. Caught by the KGB a few steps from boarding, they were sentenced to years in the gulag and two were sentenced to death; they never got on a plane. 45 years later, filmmaker Anat Zalmanson-Kuznetsov reveals the compelling story of her parents, leaders of the group, "heroes" in the West but "terrorists" in Russia, even today.

A Q&A with Jacquelyn Shapiro, board director of the Russian Division at UJA-Federation of New York will follow the screening.

A Polish rabbi wanders through the Old West on his way to lead a synagogue in San Francisco. On the way he is nearly burnt at the stake by Indians and almost killed by outlaws.

Orphaned and alone except for an uncle, Hugo Cabret (Asa Butterfield) lives in the walls of a train station in 1930s Paris. Hugo's job is to oil and maintain the station's clocks, but to him, his more important task is to protect a broken automaton and notebook left to him by his late father (Jude Law). Accompanied by the goddaughter (Chloë Grace Moretz) of an embittered toy merchant (Ben Kingsley), Hugo embarks on a quest to solve the mystery of the automaton and find a place he can call home.

The Lightning Man explores the story of Rafi Cohen in 1973 Los Angeles, who struggles to come to terms with the closing of his barbershop. A barber-sonderkommando in the Treblinka death camp, Cohen deals with the guilt of being a survivor. The temple persistently reaches out to Rafi to join the Jewish community but his battle with God and his guilt keep him away. Through the temple's efforts and the passion of one young boy, Rafi is able to see the importance in his voice for not only the survival of the Jewish people but to embrace his identity.

A Q&A with director Jonathan Goetzman and producer Bella Wadhwani will accompany the screening.

Eli (Ryan Ochoa) gets to know his grandfather Samuel (Hal Linden) for the first time when he makes him the subject of an animated art project for school. With dreams of becoming a professional artist, the high school senior discovers that his grandpa, a Jewish dry cleaner, was heroically saved from Nazi capture in Germany by a young woman when he was a boy.

A Q&A with producer Steve Weinberger will follow the screening.

"I’m a gay man from a poor Midwestern Mormon family who survived cancer and later converted to Judaism. Try fitting all that on a Tinder profile!" That’s the starting point of LATTER DAY JEW, a documentary about my Mormon upbringing, eventual conversion to Judaism at age 31 and preparation for my Bar Mitzvah in the Fall of 2017. But before I can become a man in the eyes of the Jewish law (at age 34), I feel it’s important I be the best Jew I can be and figure out what that means. LATTER DAY JEW chronicles this journey, and in the process shows that spiritual and cultural identity is deeper than just what we are born into or what our families believed and taught us.

Plus community screenings on Martin Luther King, Jr Day to be announced soon!