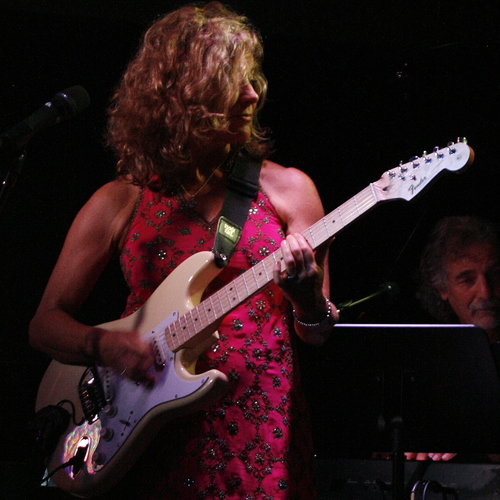 THIS EVENT HAS BEEN CANCELED DUE TO ILLNESS. ALL TICKET PURCHASES HAVE BEEN REFUNDED. WE ARE SORRY FOR ANY INCONVENIENCE CAUSED. STAY TUNED FOR A RESCHEDULED DATE.

Kimberly Ford, the veteran Santa Barbara songstress at the forefront of Joni Mitchell's wondrous songbook, sings the Blue album in her first San Luis Obispo show since 2018. Joni's 1971 masterpiece catapulted a then-cult folkie to an international icon overnight. The album was considered daring in its soul-baring tales of relationship triumphs and failures with tunes written about ex-lovers like Graham Nash and James Taylor. Today Blue sits on numerous Best Of lists and topped NPRs 150 Greatest Albums by Women.

Ford's seven-piece band, A Celebration of Joni Mitchell, is a rocking tribute to the most iconic singer-songwriter of the Woodstock generation. Modeled on Joni's tenure with Tom Scott & the L.A. Express, Kimberly and band will also play numerous selections from Joni's canon, including tunes like Help Me, Conversation, Both Sides Now, Free Man in Paris and, of course, Woodstock. The band also throws in a few you might not have heard before ...

Blue shaped Ford's formative ideas as a singer during her teen years in Fresno, ultimately redirecting her musical compass from light opera to Americana and Jazz. Unlike the other singer-songwriter options of the time that were more folk and pop oriented, Joni's music cut straight to the heart of my experience as a young woman during those tumultuous times, Ford says. She mapped the topography of love, loss and reflection better than anything else I was hearing in those early days."

Come hear this amazing band before its first East Coast tour in April, including a show at The Kennedy Center.

Beer and wine for sale at the concert with proceeds to benefit the Woods Humane Society.

"Ford's voice is rich and soulful, ideal for her regular gig as a jazz singer and perfect for the Joni catalog." ... Tim Curley, Sonoma Index Tribune

IMPORTANT NOTE: All seating is by section — VIP Preferred or General Admission — and is first come, first served. Arrive early for best seats. If you are a party of two or more, we cannot guarantee your seats will be together if you arrive right before or after the show starts. There are no refunds.