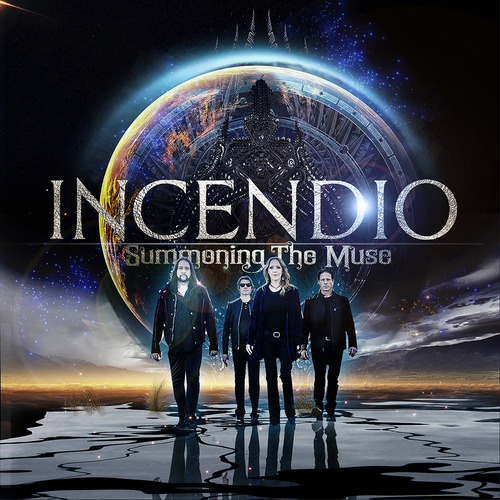 Incendio has legions of fans throughout the United States from two decades of extensive touring and they have a strong international audience from their previous eight best-selling albums. In addition, the guitar-playing members of the group — Jim Stubblefield, Jean-Pierre Durand and Liza Carbe — have their own recordings released, and all three (as well as their drummer Timothy Curle) have performed and recorded with many others acts.

Incendio’s recordings prior to Summoning the Muse are Misterioso, Illumination, Intimo, Incendio, Dia Y Noche (also available as a DVD), Seduction, Vihuela and The Shape of Dreams (more information is available at their website, incendioband.com). Many of these best-selling albums appeared on the Billboard, NAV and CMJ charts. Incendio’s music has been used on many television shows and channels including Showtime, The History Channel and Arts & Entertainment (A&E). Solo recordings by Stubblefield (guitarraexotica.com) are November, Cities of Gold, Rhythm of the Heart, Guitarra Exotica, Inspiración, Encantado and Guitare Mystique (the latter two went Top 5 on the international Zone Music Reporter Chart). Carbe and Durand (carbeanddurand.com) released an acoustic-guitar duo album, A Bridge Between, which also was a Top 5 ZMR hit. The music of Incendio and the bandmember’s other projects is available as CDs or digital download tracks at online sales sites such as CDbaby, Amazon, iTunes, eMusic, Rhapsody and many others. In addition, the music can be found on the major streaming platforms such as Spotify, Pandora, Apple Music, Google Play and other online outlets.

“When you have spent many years performing as a professional musician and when you have recorded as many albums as Incendio has,” states JP Durand, “you have to look around for new ideas and dig deep for fresh inspiration which is why we titled the album Summoning The Muse. We decided to make the pop and dance influences a little more obvious on this album, go for a more groove-oriented approach and try some sounds that we had not previously explored. We have always been known as primarily an acoustic guitar band, so we wanted to add a bit more electric guitar than usual plus some keyboards.”

In Incendio, Stubblefield and Durand are featured playing acoustic nylon-string Spanish-style guitars, and in concert they both also add electric guitar to some tunes. Carbe primarily plays electric bass, but with a background in classical guitar, she adds an additional acoustic on occasion. On the new album, Durand also plays steel-string acoustic, electric guitars, piano, electric piano and synthesizer. All three artists compose.