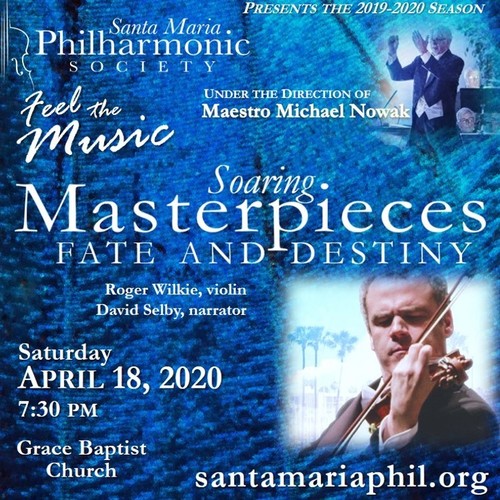 The Board of the Santa Maria Philharmonic Society has made the difficult and unhappy decision to cancel our planned concert on April 18, 2020, "Soaring Masterpieces." This is in response to state and federal guidelines and recommendations, as well as our responsibility for the health and the well-being of our patrons, musicians and staff.

This is terrible news to all of us at the SMPS. We are staying positive, however, and hope to announce soon some smaller concert offerings in late/spring early summer provided the restrictions are lifted.

We’re proud to be your resident, hometown professional orchestra and look forward to when we can play for you again. This is a very difficult time for many of us, and artists, artistic companies and non-profit groups are particularly hard hit by this necessary period of social distancing and canceled performances. We recognize that these are uncertain times for everyone, but if you are in a position to help us remain a vital part of the Santa Maria Valley community, we would be so grateful if you would donate the cost of your ticket. However, if you need a refund we’ll certainly accommodate you. Please make refund requests by no later than April 18. To make a refund request please call us at 805-925-0412.

On behalf of the SMPS, thank you for your continued support. We will see you again at a concert very soon.

Board of Directors, Musicians and Staff

Feel the Music and continue the celebration of Beethoven’s 250th birthday! The Santa Maria Philharmonic will perform an extraordinary concert for the Santa Maria community, with music by Verdi, Beethoven, and Copland, with violin soloist Roger Wilke.

Verdi’s "La Forza del Destino - Overture” is regarded as the finest of all Verdi's symphonic introductions. Translated as “The Power of Fate”, the overture creates an ominous and dramatic atmosphere of the opera, representing the tragic destiny of the story, incorporating the "Fate" motif that dominates the closing of the opera.

One of Copland's most popular pieces, "A Lincoln Portrait" was commissioned during the beginning of WWII for a program of three new works by American composers. It is a one movement work with narration made up of quotations Copland collected from the speeches and letters of President Abraham Lincoln. According to Copland, "I hoped to suggest something of the mysterious sense of fatality that surrounds Lincoln's personality.” This performance will be narrated by actor David Selby, who is best known for his performances on the series ‘Dark Shadows’ in the late 1960’s.

Beethoven’s Violin Concerto Op.61 is a work of beauty, lyricism, and depth, and in this work he broke from the earlier convention of concertos that were a display of virtuosity and technique. While the reviews of the first performance in 1806 were mixed, the later performance in 1844 by the great violinist Joseph Joaquim put it on the map as the ‘Queen of Concertos’. Soloist, Roger Wilke is concertmaster of Long Beach Symphony, and as concertmaster for legendary Hollywood composer/conductor John Williams, Wilke has served as top violinist for over 1,000 Hollywood films.

Be sure to arrive early for our free preconcert lecture at 6:50pm, to learn more about the program!

The Santa Maria Philharmonic Society is a non-profit organization.