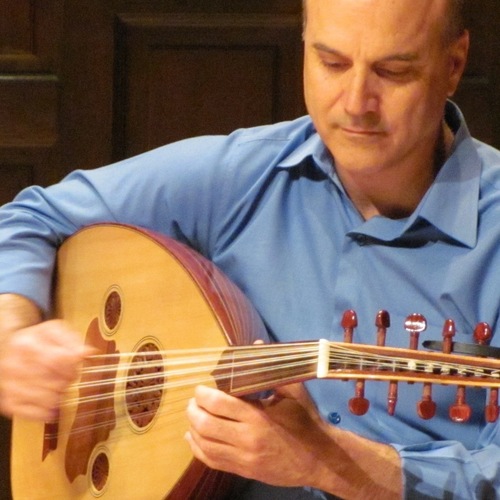 Salam, meaning peace and soundness, is found in numerous expressions across Arabic-speaking societies. Directed by Ken Habib, Ensemble Salam is a chamber ensemble (takht) that performs a wide range of Arabic and related art and popular music of West Asia North Africa with a focus on the Eastern Mediterranean. Spanning old and new, the repertoire is rooted in the traditional systems of melodic and metric modes (maqam and iqa`), and takes the form of composed and improvised works in a variety of genres.

Click Here to Listen: https://youtu.be/9jMx5dWnsz8 (you may have to copy and paste)

Click here to Listen: https://youtu.be/Zniymi5RwP0 (you may have to copy and paste)

Ken Habib is a professor of music at Cal Poly San Luis Obispo, and previously, he taught music at Pomona College and UCSB and was Associate Director of the Middlebury College Arabic School. He has an MA in music composition and PhD in ethnomusicology and is a singer, guitarist, and oudist.

Linda is a retired geneticist and avid musician. She plays oboe/English horn with Orchestra Novo, Algeria Winds as well as other local groups and plays qanun with the Cal Poly Arab Music Ensemble.

Troy Hanson is an upright bass performer and composer of Third Stream and world music. He has been performing and studying Arabic Music for over five years.

Keeth CrowHawk is a world music percussionist with a focus on Middle Eastern drumming. He can be found performing with a variety of artists and groups, working on stage at local music festivals, and leading the percussion section of the Cal Poly Arab Music Ensemble.