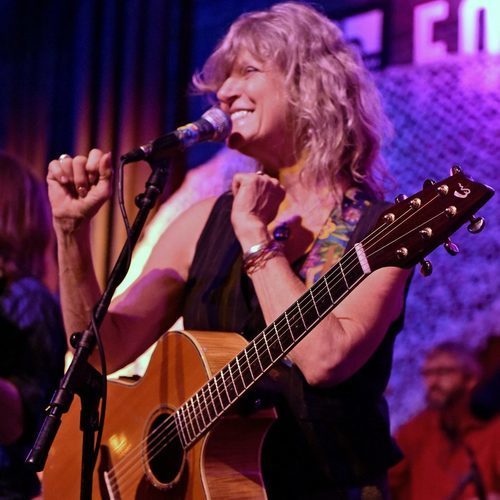 Often referred to as "The Mother of the Indigo Girls", Caroline Aiken is a Georgia Gal, she happens to be a California favorite and friend of Cambria. She doesn't tour much out this way, but when she does....her shows are SOLD OUT. Along with Central Coast special guests Jill Knight singer/songwriter and Brynn Albanese on violin, this Concert is truly going to be a ONCE in a lifetime experience!

“Caroline is one of Atlanta’s most talented and respected performing songwriters. I guarantee absolute joy..” Eddie Owen of Eddie’s Attic

Atlanta-born and Georgia-raised musician Caroline Aiken began her career in 1968, performing with a rock band “Fathertime” in Long Island, NY. She honed her skills as a songwriter and solo artist during the late 70’s, moving from busking the streets of Seattle to opening for well known acts such as Doc Watson, Bonnie Raitt, David Bromberg, Muddy Waters, Little Feat, Randy Newman, John Prine, Arlo Guthrie, Richie Havens, Derek Trucks and many more. After years of touring throughout the US, South America and Europe, she moved back to Atlanta in the mid eighties where her bluesy voice, masterful finger picking guitar style, and hypnotizing stage presence anchored the city’s acoustic and folk scene and influenced up and coming artists like the Indigo Girls and Shawn Mullins.

Caroline Aiken has released 9 albums to date, with the first one, 1988’s Line of Vision, featuring Bonnie Raitt on guitars and vocals on two tracks. Her 7th recording, Are We There Yet, Mama?, released in 2005, garnered a first draft ballot nomination for a Grammy award, and as an artist she received two New South CocaCola Awards Nominations, for Best Vocalist and Best Acoustic Guitarist. She has headlined Kerrville (many times since 1995, in 2010 with The Indigo Girls, headliner: 2015), Falcon Ridge, and High Sierra, Bumbershoot, Music Midtown (Atlanta), the GA Music Hall Of Fame mainstage with the B52’s and Mother’s Finest, and co-headlined The Mendocino with Ruthie Foster, When she’s not touring or recording, Caroline has taught her workshop “Zen and the Art of Performance” Otis Redding Songwriting Camp, Swannanoa Gathering, the annual Folk Alliance Conference as a performer, presenter and educator, and music camps nationally and internationally.

A perpetually touring artist, Caroline continues to perform throughout the US, Europe, and the UK, including numerous charitable events for at risk children, animal shelters, recovery communities, and environmental awareness. She’s been called an “Underground Legend” (Santa Cruz Goodtimes), and “The Real Deal” (Performing Songwriter Magazine), but perhaps the most accurate quote ever uttered was given by Artichoke Music in Portland, OR; “Spending time with Caroline is as unforgettable as it is inspirational. She’s truly at the heart of America’s folk/roots movement and has the skills along with life experience we all desire as entertainers.”